With Russia back in the news many people are wondering if they still have a part to play in end time prophecy? Russia is not mentioned by its present name in prophecy, but they are definitely mentioned in prophecy and still have a major role to play. Russia will once again become a superpower and a major player in world events.

We have to go all the ways back to Genesis 10:2 to historically trace Russia to its present-day.Japheth was a son of Noah and Gomer, Magog, Madai, Javan, Tubal, Meshech, and Tiras were the sons of Japheth.

The sons of Gomer were Ashkenaz, Riphath, and Togarmah.

The sons of Javan were Elishah, Tarshish, Kittim, and Dodanim.

Gog is usually mentioned along with Magog and according to the Scriptures Gog is a person but is also a place.according to 1 Chronicles 4 Joel was a son of Simeon one of the 12 tribes of Israel and Gog was a son of Joel. But in Revelation 20:8 Gog and Magog are both mentioned as great cities whose numbers are as the sand of the sea.Ezekiel 38:5 – 6 tells us that Gog is the ruler of Tubal, Meshech and Rosh along with a Confederacy of other nations: Persia, Cush, Put, Gomer, and Beth Togarmah. Most commentators interpret “Magog” as Russia because Russia is straight north of Israel, all the way up to the Arctic Circle. according to this view, “Rosh” is a reference to Russia, “Meshech” is either Moscow or the people north of the Black Sea (the area of southern Russia and Ukraine), and “Tubal” which is always listed with Meshech in Scripture, is identified as a city in Siberia or an area in central Turkey. 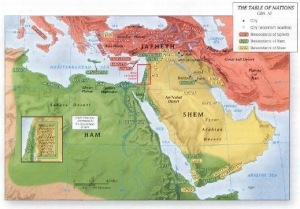 One thought on “Russia in end time prophecy! part 1”